Little Zacheriah arrived here at The Little Cats' Rescue after being found outside all alone in a thunderstorm. He was in very bad shape, weighing only 8 ounces at 4 weeks old, and he had an upper respiratory infection. Both eyes were severely infected as well, requiring immediate vet care. Dr. Elliott at Best Care Animal Hospital is such a nice man, and a wonderful vet. After examining and treating poor Little Zacheriah, he concluded that the left eye is too far gone and can't be saved. The right eye seems to be in better condition and is now healing. We are still unsure if he will be partially blind or totally blind. The vet prescribed different antibiotics and will eventually have to do surgery to remove the left eye. If you would like to make a donation for Little Zacheriah's care, you can click here to make a donation through PayPal. Thank you so much for caring about these precious beings!

By the end of May, Little Zacheriah weighed 1.3 lbs. Slow and steady, he's getting there. He should weigh 2-1/2 lbs., but he has overcome a lot. Just a couple weeks later, he weighed in at 1 lb. 10 ounces! This is a fantastic development. His eyes, however, are still not great. We're pretty sure he can see out of the right eye. We thought the left eye was being absorbed and wouldn't need enucleation, but it's taken a turn for the worse. He needs to gain some more weight before we can send him for surgery.

Zacheriah and I thank you so much for your donations for his care. We anticipate his next bill to be a large one - as we are taking him to Eye Care For Animals 'cause that's all they do! No donation amount is too small to help. Once again, you can click here to make a donation through PayPal. We'll continue to keep you updated on Little Zacheriah's progress over the coming weeks.

UPDATE 6/15/20
Good news... Zacheriah definitely CAN see from his right eye! He chased the laser dot all around the room! And, he weighed in at 1.8 pounds last night! Way to go, Zacheriah!!!

UPDATE 6/21/20
Zacheriah weighed in at 2.2 lbs. today! He is scheduled for enucleation of his left eye and neuter at The Humane Society of Tampa Bay on July 16th. He's turned into quite a feisty little guy!
UPDATE 8/7/20
Little Zacheriah had his eye surgery a few weeks ago, and he handled it like a champ! Such a miracle, he is. Together, we saved his life and one eye! Zacheriah weighs just under four pounds today. It's hard to believe the transformation... remember when he was only 8 ounces, and it took SO long to get him up over one pound? 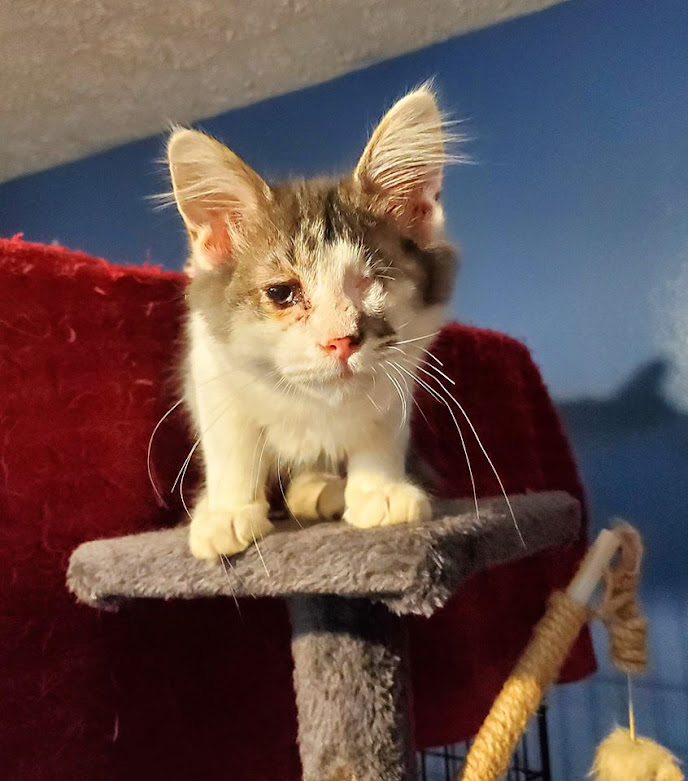 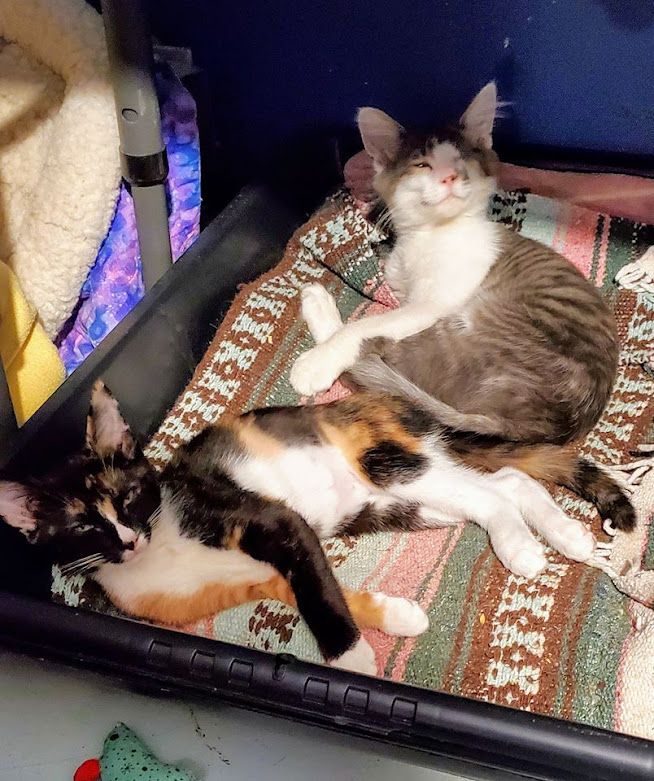 Here's Zacheriah today, relaxing with his friend Blaize a.k.a. Ms. Flame.
Thank you all for caring about this little ragamuffin!
>^..^<